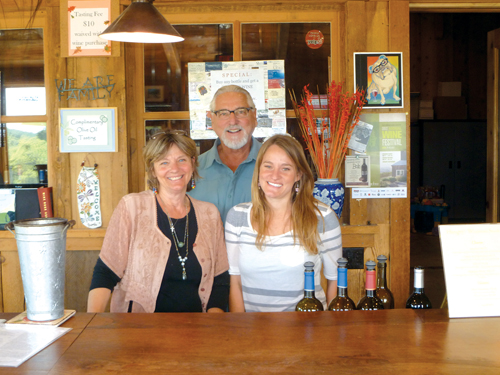 Take a wine tour to Whalebone Vineyard on the westside of Paso Robles.

Sitting on the patio outside the tasting room at Whalebone Vineyard, one of the best wineries in Paso Robles, and sipping a glass of cult “Bob Wine” as a light breeze blows, it’s hard not to fall into a hypnotic trance staring at the surrounding serene pastoral landscape.

Bob and Jan Simpson never intended to grow grapes or make wine; in fact, they never expected to live in Paso Robles. Jan grew up on a farm in Iowa, while Bob grew up in suburban New Jersey; they met and married in 1981. Dr. Bob was an OB/GYN, practicing in Montclair, California, a small rural community in San Bernardino County. When Bob saw an advertisement in 1982 for an OB/GYN to join a practice in a place called Paso Robles, the couple drove up and it was instant love – within 24 hours, their lives changed forever.

Part of the 1500-acre King Vidor Estate was for sale – Vidor being a Hollywood director whose credits include The Wizard of Oz and Northwest Passage – and on this 128-acre parcel there was a house. That sealed the deal. It was not unusual to see wild turkey, deer, wild boar, soaring eagles and other wildlife among the oak trees that dotted the hills; there were even horses and cattle on the property. There wasn’t a moment’s hesitation in their decision.

A vineyard is born

Paso was in its infancy of becoming a wine area, with only a small handful of wineries growing grapes and producing wine. Having always wanted to be a farmer, Bob decided it was time to plant some grapes. He had become friends with his neighbor Pebble Smith, wine and vineyard expert and father of Justin Smith of Saxum. Finding that he was sitting on some of the best land for growing grapes, Pebble found the perfect 10-acre block for this endeavor. The calcareous soil, altitude, drainage and south facing slope were perfect for growing Cabernet Sauvignon, the king of grapes. In 1989, a vineyard was born and due to the fact that over 6 million years ago the area was covered by water and fossilized whale bones are common throughout the area, Whalebone Vineyard was born.

In 1993 Bob retired from his medical practice and, in 1994, a ton of grapes was held back from the vineyard for Bob to make his own wine – his friends raved about the wine. Today’s silk screen label reflects the original simplicity of the first Bob Wine label made out of duct tape, but there is nothing simple about the wine. As the popularity of Bob Wine grew, winning accolades and medals, and by 2001 the entire harvest was kept for his own wine production.

The 2001 harvest, released in 2003, was an instant success and medal winner. Veteran winemaker Dan Kleck was hired and production ramped up. The next several years saw the entire crop being used by Whalebone for their BOB Wine (a savory Bordeaux blend) and Whalebone’s Cabernet. Any additional juice or grapes needed for blending or production was purchased from elite West Side vineyards. During this time, production was ramped up, wines won medals, and in 2007 a quintessential red barn was completed as the tasting room.

Today, Whalebone produces between 2,500-3,000 cases of wine. Bob’s philosophy is simple: Grow the best grapes possible, where necessary source the best grapes possible, and consequently make the best wine possible. Bob doesn’t cut any corners, aging his wines 18 months in barrel, and letting them rest an additional six months in bottle before release. They are snapped up by their devoted wine club members, with the balance being sold out of the tasting room.