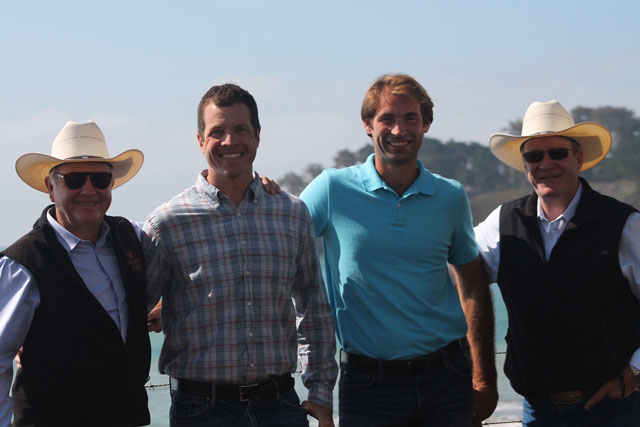 Hearst Ranch Winery co-owner Jim Saunders also announced the addition of consulting winemaker Guillaume Fabre to the team. Fabre will focus on a new ultra-premium wine program that Hearst Ranch is building into their portfolio. Fabre, who was raised in a winemaking family in the south of France, and later Bordeaux, came to Paso Robles in 2004 to work at celebrated winery L’Aventure. He later started his own brand, Clos Solène, which has garnered critical acclaim.

Saunders said he is excited to see just what the new winemakers will bring to the winery. “Soren is incredibly hard-working, super intelligent, ethical and loyal. In the years that I’ve known him, he has become an incredible winemaker,” Saunders said. “Bringing Guillaume, an extremely passionate winemaker, on board to head up our premium wine program is a great fit. Both of these young guys are talented and are a pleasure to work with – we couldn’t be happier.”

Christensen’s expertise hails from working with some of the best vineyards in Paso Robles. While at Hope Family, he worked on the winemaking team crafting Cabernet-based wines for Treana and Liberty School and later worked with the Rhône-variety based Alta Colina Vineyard.

He first met longtime grape grower Saunders some 14 years ago, when he was tasked with sampling grapes prior to the 2000 harvest. The fledgling cellar-hand became fast friends with the Saunders, who was selling his grapes to top wineries at that point. “Jim offered insight and expertise that I took to heart, so it was an easy decision to join his team,” Christensen said. “Making wine worthy of carrying the Hearst name is no small task. I am honored to join their team and will strive to exceed expectations as I embark on this new journey.

A sixth-generation Paso Robles native, Saunders partnered in 2009 with winery co-owner and co-founder Steve Hearst, great grandson of William Randolph Hearst, to form Hearst Family Wines. Hearst Ranch Winery’s flagship tasting room, established in 2010, is located in San Simeon, not far from the Hearst Castle visitor center and the original Hearst Ranch. They recently opened a second tasting room in Cholame, east of Paso Robles, to cater the growing demand for their wines.

“A partnership with the Hearst family is an honor,” said Saunders, whose great-uncle worked on the original construction of Hearst Castle. “That pride of partnership carries into our wines. When I walk through our vineyards, where you can see the eastern edge of the Hearst Ranch of San Simeon, I am reminded we have a legacy of quality to maintain.”

Hearst Ranch Winery is a partnership between Jim Saunders and Steve Hearst. Crafted from estate vineyards in Paso Robles and the historic Hearst Family Ranch in San Simeon. Their wines can be enjoyed at two tasting rooms: San Simeon, on the coast and Cholame, just east of Paso Robles.